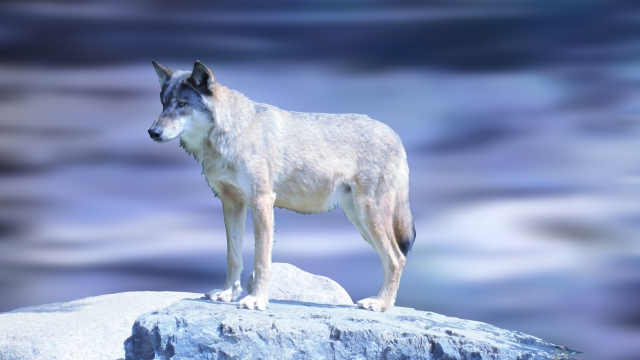 Kara tightened the cord holding her parka hood closed and retrieved the knives lying on the hardened snow. Cramps gnawed at her legs as she crouched, but she kept her vigil, carefully scanning the icy landscape, as still as stone. The sound of drumming feet reached her ears, growing louder as the elk ran over the rise, pursued by three silver furred wolves. Mist exploded from the elk’s mouth with each step, sides heaving with fatigue and eyes wide with terror. The elk tried to turn, but the lone female of the pack charged and snapped until the elk returned to its original path.

Heart hammering with nervous excitement, Kara remained frozen in place as the five hundred pound cow drew near. One strike from its massive feet could kill her or the wolves. It was risky for their small pack to hunt an animal this large, especially with an untried pup that had dull fangs and only two legs. But they needed meat and this was the only game for miles.

The two lead wolves struck the elk simultaneously, causing it to rear up almost on top of Kara. Flush with the fervor of the hunt, Kara sprang from her hiding place and sunk her blades into the elk’s neck, only barely missing the thrashing animal’s deadly feet. She leaped back in triumph as the elk sank to the ground. Finally, she had proved herself more than a mere puppy.

I am a writer, artist, and parent.
View all posts by A. L. Kaplan →
This entry was posted in Short Story and tagged elk, International Wolf Center, short story, wolf, wolves. Bookmark the permalink.