For the Love of Canines: Arthur Part 1

While we would have loved to adopt, with two small children we wanted to be sure of temperament. After careful consideration we decided against another Malamute. While we loved Praeses, we wanted a breed that would get along with other dogs. Our choice – Portuguese Water Dog. We researched, visited breeders, clubs, and homes and finally found someone in Ohio that would have a litter ready for new homes about the time school let out. (I was teaching at the time.) 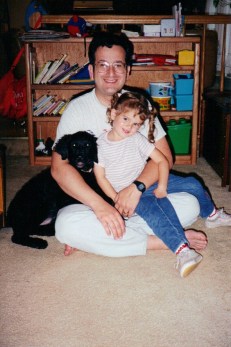 The breeder required a three page application and two letters of recommendations. It was clear from the start that they did this for the love of the breed, not to make money. Our particular pup ended up with an improper coat but that didn’t bother us at all. Go figure. He shed and looked a little different than the other PWDs, but his attitude was all PWD.

I drove out to get him the first week in June. When the door opened, there he was, Haleakala Aka Loekai, Hawaiian for Arthur King of the Sea, sitting politely at the door. Our eyes met, and I knew, he was the one I had been looking for. It felt as if Praeses was staring at me through new eyes. The first thing Arthur did was jump up and grab my braid, just like Debra did when she nursed. It was a bit of foreshadowing that I didn’t realize at the time. 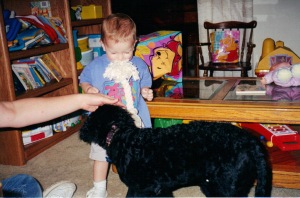 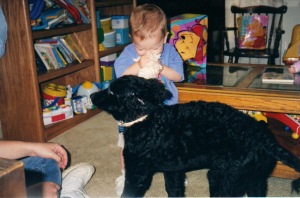 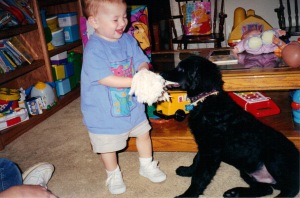 When I mentioned the connection to Praeses’ spirit so to speak, I didn’t mean they were the same. They were as different as night and day. Praeses was snowy with typical malamute patterns. Arthur was jet black with a small white goatee. One was mellow and slow, the other bouncy and fast. Switching from a dominant female that lifted her leg, to a submissive male who squatted had its challenges. The first time I gave the heal command in obedience class; Arthur bounced like a rubber ball. I needed to learn to dial it down a little with him.

The first time I tossed Arthur’s toy, he trotted right back and plopped it in my lap. I was stunned. It was the first time a dog had voluntarily returned anything. Playing catch became a favorite game and Arthur, in his enthusiasm, would run into furniture, walls, and people. Anything in his way was bowled over in his desire to get the toy. He didn’t seem to notice. He very quickly transferred the idea of retrieving to the Frisbee and a little over a week before he began to catch it. His usual habit at that time was to drop the retrieved item on the ground at my feet. A few days after I had had some minor surgery, I looked at him with sad eyes and told him that I couldn’t bend down to pick it up. Arthur understood. He picked up the Frisbee and handed it to me. It was the last time I needed to pick up a toy for him. 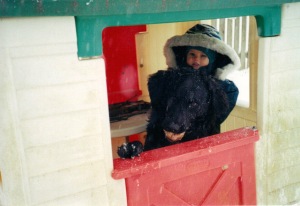 Later on Arthur and I gave agility a try and loved it, but classes were too difficult to get to on a regular basis. I set up my own jumps and tunnels in the yard so we would play. Trips to the local lake and playground with the girls became even more exciting. If no one else was around, I would let him climb the ramp to the tower and go down the slide.  His tail wagged and his tongue lolled as he played and barked. It took me a while, but I finally realized that if he had a ball in his mouth he couldn’t bark while he ran around.

3 Responses to For the Love of Canines: Arthur Part 1