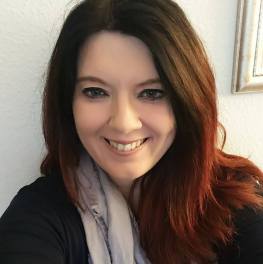 J. L. Smith lives in Odenton, Maryland. Her works have appeared in many literary journals and magazines, including Cirque, Alaska Women Speak, The Avatar Review, Five 2 One Magazine, Fourth & Sycamore, and more. She is an author of two poetry collections. Her book, Medusa, The Lost Daughter, is a narrative series of poems based on the Medusa myth. Her most recent collection is Weathered Fragments, Weathered Souls, which features previous published poems and a few new ones.

Wolf: What is the strangest food you’ve ever eaten?

J.L.: Easily, it was this Vietnamese soup I had while I was living in South Korea. I cannot remember the name of it, but I remember what was in it: full, head-on prawns, baby crabs cut in half, completely intact baby octopus the size of a thumb, and more, in a spicy lemongrass broth. I love hot foods, but this one did make me cry! It was so spicy. I actually got cuts on my hand from deshelling the seafood. I called it the “soup that fought back,” and yes, I ordered it again the next time!

Wolf: That sounds good. If you had to pick a weapon, what would it be and why?

J.L.: I would choose the bow and arrow. Not because it is practical–because I have no idea how to use one–but because it is quiet, quick, and graceful in its own way.

Wolf: I’ve always loved bows as well. What is the nicest thing you’ve ever done to your characters?

J.L.: I gave a supporting character a lead role. A character in my work-in-progress novel, The Fleeting Lights, was originally written as the lead’s romantic interest, but had little else going on. It took me some time, but I went into his psyche (I know, weird, but writers understand!), found out more about him, and now he has been brought to life as a full character with his own backstory. What more can character ask for?

Wolf: Indeed. What is the meanest thing you’ve ever done to your characters?

J.L.: I made Phorena (Medusa, The Lost Daughter) responsible for setting up Medusa’s downfall. Having watched the whole attack, Phorena just led Medusa to her sentence. I had misgivings about that, because how can Phorena be redeemed after that? Yet, given Phorena’s and Medusa’s relationship, all actions led up to that very scene, making it seem natural for Phorena to be there at Medusa’s downfall.

Wolf: It’s still harsh, but I understand. Do you consider yourself a cat person, or a dog person?

J.L.: Cat person all the way. The little box is a wonderful thing.

Wolf: But that little box needs to be emptied. What five items would you want to have in a post-cataclysmic world?

J.L.: Abundance of clean water, a sustainable food source, shelter, soap, and a picture of my daughter.

Wolf: All good choices. What is your favorite body of water and why? (river, ocean, waterfall, puddle, bottle…)

J.L.: I always preferred the ocean. It is boundless and deep, begging to be explored.

Wolf: Don’t forget waves. Waves are fun. What story are you working on now?

J.L.: I am working on a follow up to the Medusa, The Lost Daughter. Medusa: War and Punishment (working title) will focus on Medusa’s exile, the war in Olympus, and the war on the mortal world.

Wolf: Sounds interesting. Want to learn more about J.L.? Check out the links below.

I am a writer, artist, and parent.
View all posts by A. L. Kaplan →
This entry was posted in Essay. Bookmark the permalink.