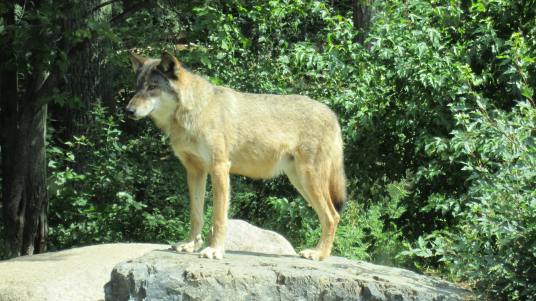 Elana A. Mugdan is an author and semi-retired filmmaker based in New York City. She has received many accolades in the film industry, including a number of awards for her feature film Director’s Cut, which she wrote, directed, and produced by herself.

An avid reader, Elana is a lifelong fan of fantasy stories—particularly ones which revolve around dragons. She is described by her friends and family as “the weirdest person I know”, and wears that weirdness proudly on her sleeve. Some of her favorite authors include J.R.R. Tolkien, Peter S. Beagle, and Robert Jordan.

Wolf: Glad you could join us today, Elana. Love your costume. If you could be any animal in the universe, what would it be and why?

Elana: The answer to this is obvious: I’d be a dragon! I’ve been a dracophile for as long as I can remember, and dragons have always been a source of strength and inspiration for me. Considering the fact that I am the World’s Foremost Dragon Authority, as well as the OG Mother of Dragons, I think I’d adjust to draconic life quite easily. Plus, flying and breathing fire and having the power to decimate my enemies? Yes, please.

Wolf: I guess I didn’t really need to ask that question. If you had to pick a weapon, what would it be and why?

Elana: Although there are plenty of cool weapons out there, there’s just something about a good old-fashioned sword that I love. I was always partial to them, and always wanted to be a master swordsman—I even took fencing lessons when I was young, since that was the closest I could get to actual sword fighting. However, the dreams of swordsmanship eventually fell by the wayside, and now I must live out those dreams vicariously through the characters in my books.

Wolf: Swords seem to be very popular. Most writers tend to do unkind things to their characters. What is the meanest thing you’ve ever done to one of yours?

Elana: Without giving away too many spoilers, I will simply say this: I once pulled a George R. R. Martin and went on a killing spree, murdering several major characters in an important battle scene in one of my stories. It was heartbreaking, but it had to be done. I’ve also written quite a lot of my own traumas into my main novel series, subjecting my protagonist to a slew of heartaches, losses, and betrayals.

Wolf: Yup. Dead is kind of bad. You’ve just been turned into a plant. Describe yourself.

Elana: I’d definitely be one of those monster man-eating plants, like the kind in Little Shop of Horrors. A massive Venus Flytrap type of thing with writhing tentacle-vines and a gaping, fanged mouth. I wouldn’t hide in the shadows, though—I’d grow on a mountaintop, reveling in the sun, and I’d challenge every human who dared ascend my peek.

Wolf: I think I’ll stay away from your mountain. If you could have a super power, what would it be?

Elana: If you had asked younger me this question, she would have probably said something cool like “time travel”, “teleportation”, or “shapeshifting”. However, now that I am older and wiser, I think I’d have to say: mind control. If I had the ability to control people’s thoughts, I could very quickly become rich, rise to power, and take over the world. Hm, that sounds very villainous, doesn’t it? Don’t worry, I’d use my powers for good—I’d force people to clean up the planet and start being nice to each other.

Wolf: Yet the first thing you thought of was world domination. There is a door at the end of a dark, damp corridor. You hear rumbling. What do you do?

Elana: Quite obviously, I go to investigate. I’d be cautious, of course, but my curiosity would get the best of me. Besides, I’m the kind of lunatic who would love to find a ghost or some horrifying creature behind the door. So even if I’m walking into a dangerous situation, for me it’s still win-win.

Wolf: I like the way you think. What five items would you want to have in a post-cataclysmic world?

Elana: The essentials for survival: a backpack to carry supplies, a water purifier so I never have to worry about clean water, flint rocks to make a fire (matches are too easily lost, and run out too quickly), a gun for defense, and a blade of some sort—I’m not necessarily saying a sword, but hey, if the shoe fits, wear it! The blade would be for chopping wood, whittling, and helping me to look cool.

Wolf: Not to mention it would be great for defense. Do you have a favorite character?

Elana: I love all my characters for different reasons, but the one I love most is Cezon Skyriver, who is a minor character we keep running into throughout my main novel series. Simply put, Cezon is a criminal, and he is one of the funnest characters to write. In fact, I’ve so enjoyed writing in his voice that I’m considering writing an accompanying world-building novella starring him and his band of misfit delinquents!

Wolf: Good idea. What is your favorite body of water and why?

Elana: In my youth, I visited Moosehead Lake every summer. This is a beautiful lake in central Maine, and some of my fondest childhood memories revolve around it. I remember playing with friends upon its shores, swimming out to explore little islands, and skinny dipping by the light of the full moon. It is, bar none, my favorite body of water.

Wolf: Sounds beautiful. What story are you working on now?

Elana: Currently I’m working on Dragon Blood, book three in my YA fantasy series, The Shadow War Saga. It’s scheduled for publication on March 6th, 2020. I’ve just finished the final round of editing, and I’m now sending it out to my beta readers to gather feedback!

Wolf: Thanks for visiting. You can connect with Elana through these links:

I am a writer, artist, and parent.
View all posts by A. L. Kaplan →
This entry was posted in interview and tagged A. L. Kaplan, author interview, dragons, Elana A. Mugdan, Fantasy, George R. R. Martin, interview, mind control, swords, Venus Flytrap, wolf notes, YA, young adult. Bookmark the permalink.