For the Love of Canines: Praeses Part 1

Several years after Tiger passed on I found myself living in downtown Baltimore. Grad school at MICA was fine, but city life just isn’t my thing. I missed the outdoors and going for walks in the park without fear. Walks at night were out of the question unless I had an escort. More importantly, I missed the kind of companionship only a dog can give. No strings, no demands, just unconditional love. Unfortunately, without a MD drivers license, adopting from the local animal shelter was out.

I’ve always felt it important to do research before adopting any pet. After all, a bad personality mix is worse than no pet at all. The needs of the pet have to be met. A stray cocker spaniel followed me home one day. It was cute, but grabbed my ankles when I tried to play, which I found annoying. Besides, she was way too small for me. I wanted a dog I could pet without having to bend over, one I wouldn’t be afraid of stepping on by accident. It wasn’t hard to find her a good home, but that left me still dogless.

While perusing a book in the library, I discovered the perfect breed of dog for me. The first line on the description read “don’t let the wolf like characteristics for this breed deter you.” I was hooked.  The Alaskan malamute is a working dog and like most of the northern breeds, highly independent.

I found a local breeder through an ad, and after several interviews, was allowed to pick a dog from her litter. Half a dozen puppies ran and greeted me enthusiastically on that 95 degree humid day. One small fur ball said hello, then separate from the frenzied pack and crawled under the shade of a lawn chair. She was different, with shorter fur, and in my eyes smarter for getting out of the sun. I knew then, that she was the dog for me. As luck would have it, she was also ‘improperly coated’, which meant she wasn’t a show dog. That was fine. I wanted a companion, not a beauty pageant queen. So, for 200 dollars and a barter deal for a few sculptures, my new best friend came home with me. 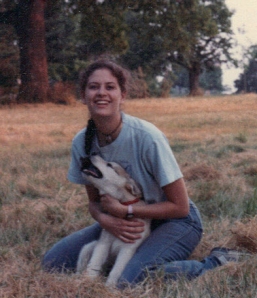 Praeses is Latin for guardian or protector or in her case, protectoress. She more than lived up to her name, protecting me from every squirrel and dog in the neighborhood. Her very appearance, even as a puppy inspired some people in the city to cross the road, rather than walk past her on the sidewalk. If they only knew. Praeses, like wolves in the wild, lived by the hierarchy of the pack.  I was her alpha, but most people were betas in her eyes, putting her one level below. I kept that secret safe. 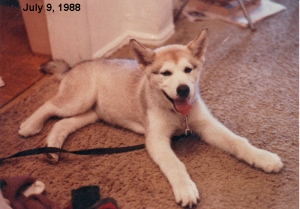 Funds were tight as a student, and I gulped at our first vet visit when the receptionist handed us our bill and politely said, “That will be 150 dollars this time” It was the ‘this time’ that got me. Owning a dog is expense but worth it.

Our first night, I was so afraid she would have an accident in the house, that I didn’t sleep a wink. Every time she stirred, I would scoop her up and take her to the curb. We finally got our rhythms in sync after a week or so, and my roommate told me how to make a station chain in the kitchen to keep her out of mischief until she was house trained. Even if I could have afforded a crate, my research had mentioned that malamutes preferred tie outs to the confinement of a crate.

I am a writer, artist, and parent.
View all posts by A. L. Kaplan →
This entry was posted in Essay and tagged Alaskan Malamute, animals, Canine, dog, dog lover, dogs, Love, nature, Praeses, wolves. Bookmark the permalink.

2 Responses to For the Love of Canines: Praeses Part 1